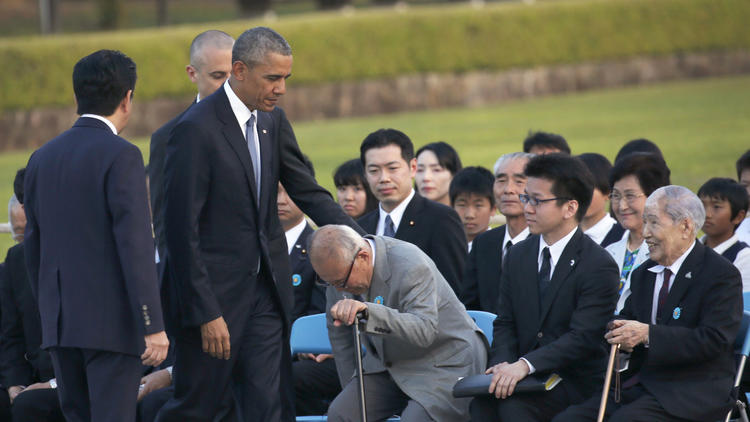 President Obama greets survivors of the atomic bombings at Hiroshima and Nagasaki, including Sunao Tsuboi, right, during Obama’s visit Friday to the memorial at Hiroshima. (Shuji Kajiyama / Getty Images)

President Obama’s historic trip to former enemy nations in Asia got off to a bad start this week when, just after he announced a grand gesture of reconciliation with Vietnam, he learned that its communist government was intimidating dissidents he had invited to meet with him privately.

Obama fumed over the matter on his way out of Hanoi and his aides voiced his fury to their counterparts, but they soon encountered what they took as a heartening sign.

More than 2 million Vietnamese people, young and old, lined the streets to welcome Americans back to Ho Chi Minh City, the former Saigon, many of them camping out overnight despite the government’s decree that such an assembly would not be allowed.

“It was like a ray of light,” said one Obama administration official who was in the presidential motorcade.

The sight bolstered Obama’s impulse in his final years in office to write U.S. foreign policy in bolder, potentially historic, strokes. His trip to Vietnam and Japan shaped up as a testament to his inclination to push forward while setting aside criticism, as the normally cool president repeatedly confronted both complaints and deeply emotional situations.

The most powerful sign of Obama’s reach for history came at the end of the week, when he stood in front of the people of Hiroshima to own responsibility for the world’s only uses of nuclear weapons seven decades ago and to promise to pursue a new alliance against the use of such military might in the future.

Despite the resolve, the week leading up to that memorable ending was filled with internal White House drama as the president and his aides encountered a series of ups and downs. 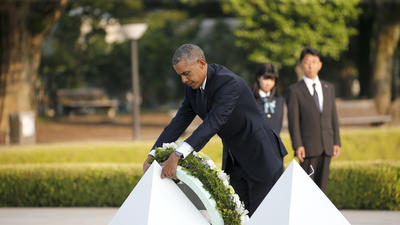 In historic visit to Hiroshima, Obama calls on the world to morally evolve

Early in the weeklong trip, the traveling White House was irritable over coverage of Obama’s lifting of a half-century-old arms embargo against Vietnam. Aides objected to reports that suggested Obama had given up too much without extracting human rights concessions from President Tran Dai Quang’s government, which has a record of harsh treatment of journalists, activists and government critics.

Then, just after arriving in Japan, Prime Minister Shinzo Abe, one of Obama’s strongest international allies, confronted him aggressively in public with a contentious complaint about the slaying of a woman in Okinawa. A former member of the U.S. military has been accused in her death, spurring widespread outrage in the country and resurrecting the longstanding tension over the U.S. military presence there.

In the same news conference, Obama visibly bristled at a question on whether he worried about handing over to a new president the drone killing program he has so dramatically expanded. The question was prompted by Obama’s order to use an armed drone to kill the leader of the Afghan Taliban as he traveled in Pakistan, a sovereign country where Obama did not ask permission to strike.

In an implicit nod to the history between the U.S. and Vietnam, the country he’d left hours earlier, Obama argued that there were “few parallels” between the U.S. deploying a half-million troops to Asia during the war there and the strikes he has taken against terrorists trying to kill Americans.

The difference, he suggested, is one of proportion, even though he maintained his responsibility to use U.S. power to protect Americans.

“There are going to still be times where our U.S. fighting forces have to be deployed or have to take actions,” Obama said. “And we have to do so in a way that is prudent, that is proportional, and that is mindful of the fact that any kinetic action, no matter how targeted and how justified, also can create tragedy.”

Hiroshima and U.S. military power were on his mind as he answered, he revealed.

“One of the things that I hope to reflect on when I’m in Hiroshima, and certainly something I reflected on when I was in Vietnam, is just a reminder that war involves suffering, and we should always do what we can to prevent it,” he said.

Indeed, aides said, Obama was wrestling with what to say in Hiroshima, where on Friday he became the first sitting U.S. president to visit the site of the world’s first nuclear attack. An estimated 140,000 died instantly or of the aftereffects of the atomic bombing on Aug. 6, 1945, that helped bring about the end of World War II.

Obama cast aside his early version of the speech he planned to give, which employed trademark Obama oratorical devices like telling the personal stories of victims and outlining the way forward.

He wanted more of an elegy, he told Ben Rhodes, the deputy national security advisor who was helping him write the address. Rhodes took it apart and began to piece together a new draft.

As he did, Obama’s mood was darkened by heartbreaking personal news. Cassandra Butts, a close classmate in law school and friend to him and First Lady Michelle Obama, was found dead in her Washington home after a brief illness.

Butts was a trusted confidant who first met Obama in the financial aid office when they were both at Harvard Law School in the late 1980s and early ’90s. After Obama was elected to the Senate in 2004, she took a leave from her think tank job to help him set up his office.

Obama was somber and unsmiling as he met Thursday and Friday with other global leaders at the Group of Seven summit in Ise-Shima, Japan, rewriting his Hiroshima speech three times during breaks. He forced a brief smile for the G7 group photo.

Finally, he headed to Hiroshima, the last stop on a trip that likely will only be long remembered for what happened there. Rhodes furiously incorporated Obama’s final changes into his remarks while the president spoke to Marines just before taking a helicopter ride to the memorial in Hiroshima, near the river that victims plunged themselves into to escape the heat and flames of the explosion.

Obama took a paper copy to the lectern to speak.

“We have known the agony of war,” Obama said. “Let us now find the courage, together, to spread peace, and pursue a world without nuclear weapons.”

Afterward, he met one bent and scarred survivor, an elderly man who was a young engineering student when the blast of the bomb burnt his entire body.

Sunao Tsuboi, white scars across his face, cane in hand, greeted the president with a warm smile and immediately launched into a welcome that Obama interpreted mainly through body language.

Speaking in Japanese with no pause for his translator, Tsuboi gestured broadly toward the sky as he spoke and gazed warmly at the president, Obama later told aides.

One phrase made it into English: “I have been waiting so long for you to come here.”